Here is the 2nd part of Captain Pierre Wannaz blog article about the Swiss Cheese Model. Pilot training and pilot debriefing are some linchpins of flight safety. Let’s discuss openly this subject before the World Aviation Training Summit (WATS) 2019 with this new blog series published every Tuesday!
By Capt. Pierre Wannaz - Apr 09, 2019

Part 2/2: A closer look at a tragic accident: lessons learned

A few years ago, an A330 has been lost over the Atlantic while crossing the ITF (Inter-Tropical Front, an area with huge thunderstorm clouds), having his pitot tube obstructed by ice for a short period of time. 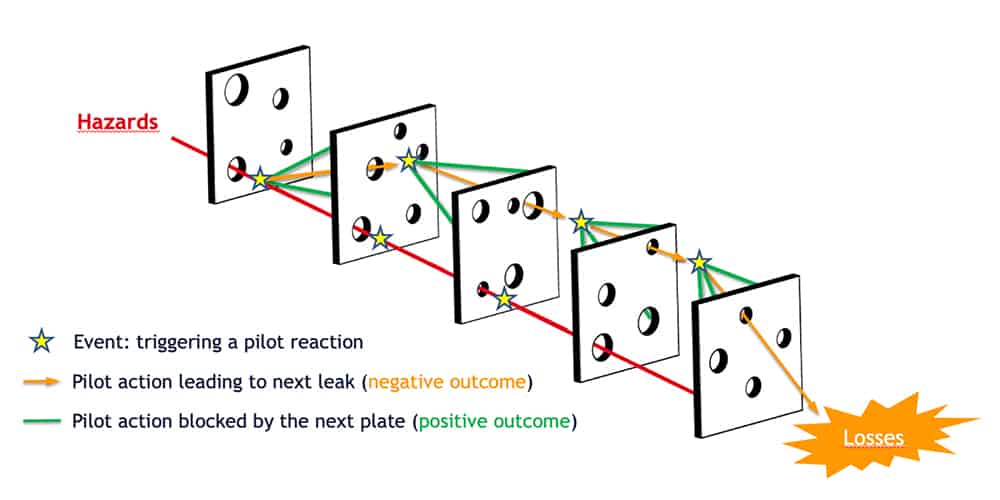 Applying the Safety-II approach concept, what could have been influenced (with a more resilient system)?

Let’s see what happened chronologically and applied with Safety-II, all the “could” below would be outcomes, green in the graph above that would have been stopped by the next safety plate:

1. Approaching the ITF, the copilot on the right seat expressed some concern to the captain about the weather ahead. It was almost at the same time when the captain was allowed to go for his rest.

The crew action (orange in the graph above) let the aircraft pass through the 1st safety plate!

2. Approaching the ITF, a massive thunderstorm area was located on the foreseen route and the crew started a deviation of their intended flight path.

… The crew action let the aircraft pass through the 2nd safety plate!

3. Then, the aircraft arrived in an area with ice crystals or very high humidity and the pitot tube got stuck with ice for a short moment. In this complex situation, with a lot of warnings and degradation of flight laws, the crew actions led to the loss of the A330.

If the first two subjects are resilience points based on what can be learned from the experience and crew resource management, the third point is much more complex to solve.

How could the flight safety department raise the resilience of a crew confronted with a sudden demanding and complex situation?

A pitot tube is a mechanical device that in many circumstances can be stuck. Ice or heavy precipitations, volcanic ash, bird strike, insects in the tube, ice accretion or any form of aerodynamic disturbance in front of the pitot position will lead to erroneous Air Data values!

It is basically not an aircraft problem, all planes worldwide are still using an almost 300-year old system invented in 1732 by Mr. Henri Pitot and this very old technology is used to feed information in a modern digital computer.

On the A330 fleet, previous to the above-mentioned accident, dozens of similar cases of stuck pitot tubes had been reported. 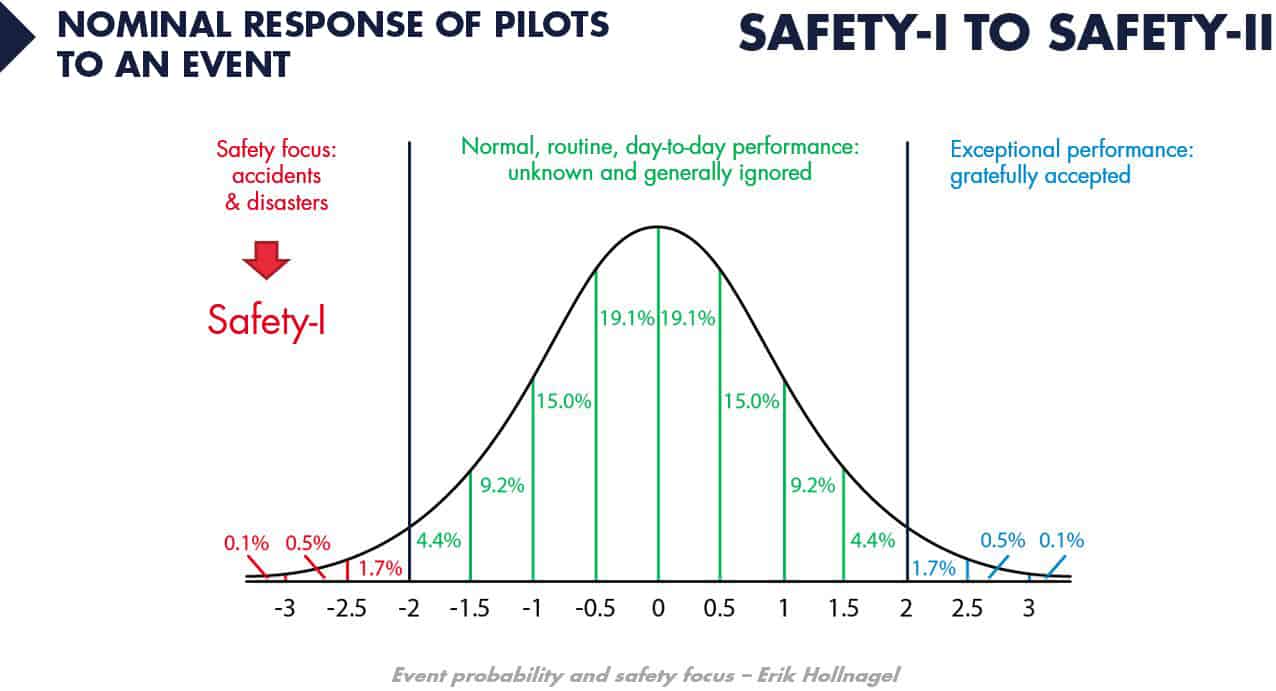 As the involved crew successfully solved the problem, they did react in the “green part” of the graph above showing pilots’ nominal responses to an event. The industry didn’t catch the real challenge and difficulty of such a situation.

The way to solve an “unreliable airspeed” situation seems to be extremely simple out of the books:

The reality in this situation is much more complex to fly as it seems. A modern aircraft is a network of computers, many of them use air data as a source of information. If the information of the air data is corrupted, many systems will display a failure message or worse, just react erratically.

In the numerous cases reported prior to the crash, a few pilots confronted to unreliable airspeed massively overperformed, they immediately realized the situation, applied the correct procedure. As in all cases reported, the indicated airspeed is usually available within 2-3 minutes maximum. In the case of the lost aircraft, the first speed indicator that recovered correctly was just after about 30 seconds.

On the other side, many pilots wrote reports mentioning the initial confusion, the startle effect they had during the first seconds.

What could have been learned from these pilots to enhance safety?

It is a fact. Today’s safety approach (Safety-I) didn’t realize the potential danger of the loss of data from the air data systems despite the numerous reports. They were not located in the “red square” of the graph above, the actual focus of Safety-I, and so went ignored or at least not realized in their full magnitude.

Reporting on written form (today’s approach) via the “Safety Management System” didn’t catch the severity of such an event, why?

Safety-II is here the way to understand and a solution exists, thanks to flight data animation 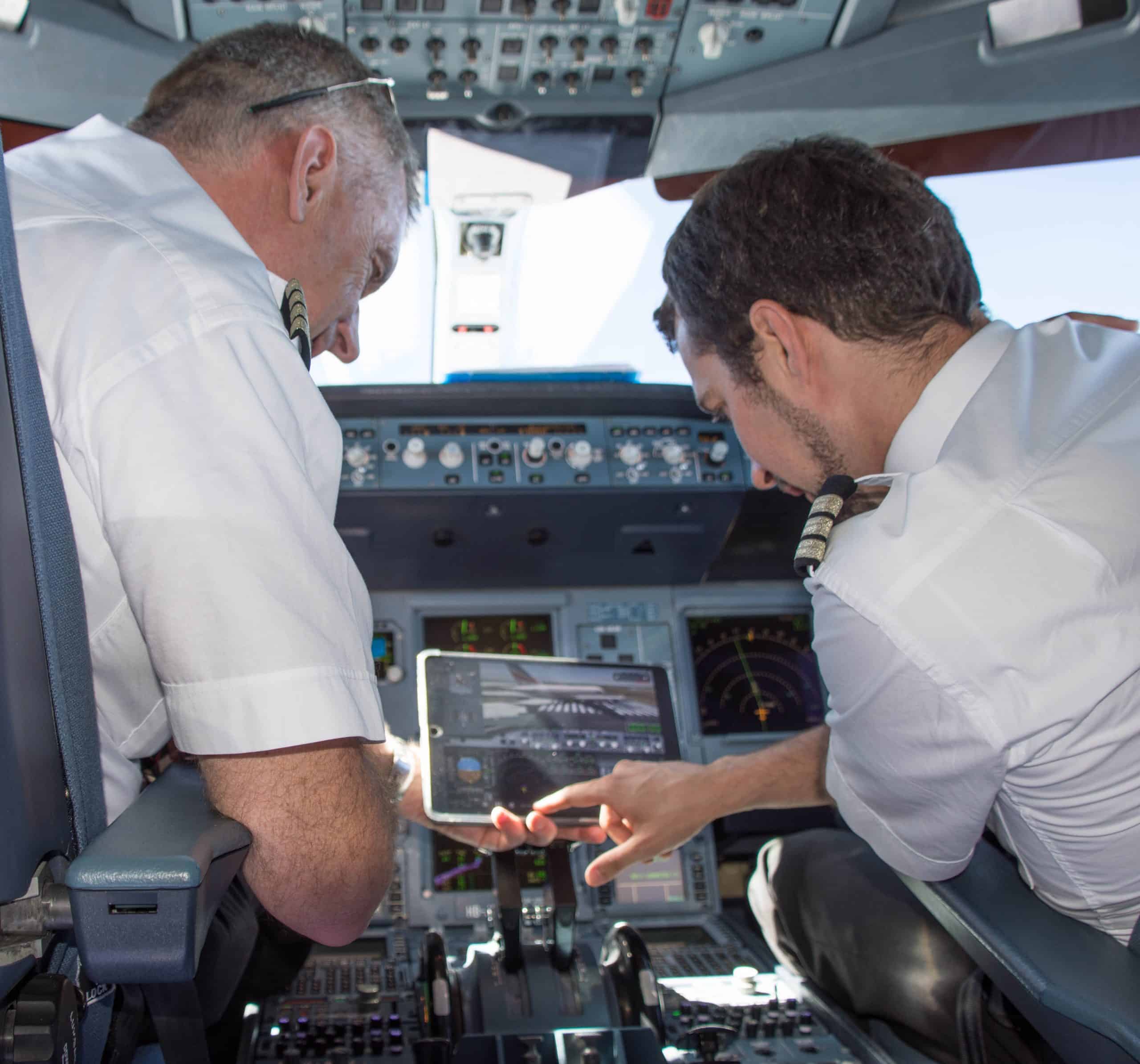 I am convinced that a visual representation of such an event is the best way to fully realize and explain what happened, what is the cascade of problems and failures and what are their consequences.

Most airlines already have some form of visualization system used by the flight safety department like CEFA FAS. Apparently, these systems with the current Safety-I approach have not always been used in their full potential to present better and more didactic animation.

With CEFA AMS, a flight data animation service made available on pilots’ tablets right after landing, each pilot is in a position to replay an event on his own! The quality of reports will be massively increased by being able to replay and understand the whole situation.

Imagine the potential improvement, in a non-punitive environment, that such an animation can bring. Possibilities are numerous:

By combining today’s technology with an efficient reporting system using animation and by implementing the Safety-II approach concept, the potential to improve flight safety can be easily and massively enhanced, at low costs with the correct tools!

Now, what do you think? Share your personal thoughts in the comments below! Don’t forget to read the 1st part of this article.

Also, you can come & discuss with Pierre personally on CEFA Aviation stand, booth #210 during the World Aviation Training Summit (WATS) in Orlando, USA, from 30th April to 2nd May 2019.

Next to be read: “The resilience of pilots: a definition – how to enhance it?”

You can also contact him via LinkedIn or via this link. Talk to you soon!

Flight data and human perception: A huge potential still to be better exploited!