Fill in your Electronic Flight Bag!

To continue with the ins and outs of digitalization in aviation, the 3rd article of Captain Pierre Wannaz for the opening day of APATS 2019 proposes ways of improvement through the Electronic Flight Bag (EFB) which represents a great potential of enhancement for pilots’ performances.
By Capt. Pierre Wannaz - Sep 04, 2019

Let’s discuss this in the comments – this blog, “a pilot’s view”, is actually meant for “pilots’ voices and points of views”! 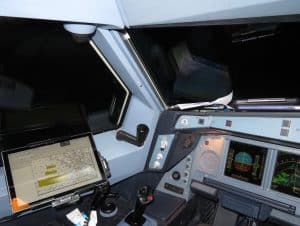 In most pilots’ crew bags, a laptop, or more often a tablet, is replacing a stack of books. The first positive aspect is the removal of about five manuals, saving around 6 kg of weight. A nice improvement for our back as we carry our crew bags all around the world! And for sure, this represents also a lot of other positive aspects for the airlines such as fuel economy and quicker revision process.

I acquired my flying experience using mainly traditional paper documentation. Having worked with computer and software development for many years, I welcomed the arrival of documents in digital form with a lot of interest.

Now carrying an almost empty crew bag, except for the tablet sometimes, it is interesting to reflect on the pros and cons of the software used in these devices.

The aircraft I fly now is not equipped with an EFB class 3, but with EFB class 2. More technical information about EFB classifications on SkyBrary.

This means that we are used to working with a computer, mounted on a support in the aircraft, which is administrated and updated by the company. In addition to this, we also have another one as a personal device, each pilot is responsible for its updates. This personal computer is accepted as a valid replacement for the fixed one in case of failure.

What are the main positive aspects of using the EFB:

II. Advantages and suggestions of enhancement of current EFBs

Has the migration toward digitalization partially forgotten the human aspect? Let’s have a look at the positive aspects and some drawbacks of EFBs’ current implementation. 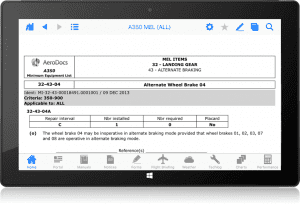 The main positive aspect is access to the complete company and aircraft documentation in a single location. Some links allow easy navigation between documents. Backlighting and zooming possibilities enhance the reading in adverse conditions.

Despite a lot of good aspects, the EFB is actually mostly offering only a digital version of paper documents. Today’s indexing and search possibilities are too limited. Without the exact wording for a search, we might get to nowhere.

The following example, encountered during a recent line check in New York City, illustrates this problem. My trainees knew that a procedure existed to cut the engines in case of a long delay. They wanted to prepare this option and used the search function with wordings like “stopping engines”, “one engine taxi”, “engine off prior take-off”, “delay/cut engines”… without any positive result until one of them successfully remembered the exact name: “remote holding”! As the checklist had been moved from the FCOM (flight crew operating manual) into the FCTM (flight crew technics manual), browsing the FCOM into the logical place like “supplementary procedures” was useless.

Looking at today’s possibilities, this way of working is inefficient and time-consuming. Let’s figure out the loss of valuable time if, during an emergency where pilots’ cognitive skills are already reduced, they have to find the exact wording in order to access vital documentation!

Another drawback of today’s approach is the follow-up of revised items in the documentation, especially when some text has been removed. Usually, there is only a small prompt visible in the margin. It is then necessary to open separately the old documentation in parallel, in order to realize what has really changed.

Potential for improvement exists in the revision follow-up, like showing in a separate pop-up the old and new paragraph and in the indexing process. The use of fuzzy logic or even artificial intelligence could facilitate search and both would be highly welcome! 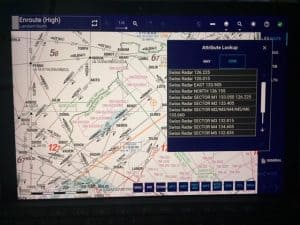 The main positive aspect is the access to all documentation in a single place, no more pages missing or badly readable due to a spilled coffee cup in the crew bag. Another good point is the useful and easily accessible pop-up, such as frequency and special information related to the FIR (flight information region) we are flying through.

On the negative side, we mostly have only a digital copy of what we had in paper form. No moving maps and no aircraft automatic position update to facilitate the follow-up are implemented in the version I am using.

Let’s look at terrain awareness, especially in the case of decompression. Pilots have to reach, within a given time (depending on the duration of the passenger oxygen generators system), a safe altitude in order to guarantee the survival of everybody on board.

Today’s electronic maps do not make the job easier than it used to be on a previous paper chart. Pilots still have to figure out their own strategy and are now on a relatively small screen. Even today, it is more difficult to get the big picture of a specific situation. Either we zoom out the map in order to have a large overview of the terrain and airports around us, but with this configuration, the software removes the airways restricting altitudes, or we zoom-in to read these altitudes but then it is difficult to keep the “big picture”.

Realizing this flaw, decompression scenarios have been separately published in the library, but frequently, for weather or other operational reasons, these published routes may prove to be inadequate. Once again, pilot creativity is essential, unfortunately with the help of a sub-optimal tool.

With today’s computer power, the distances between airway waypoints and altitudes are stored in our devices. I am convinced that better interactive software allowing better situation awareness is possible. Enabling the calculations of decompression scenarios or engine failure routes, respecting the given oxygen limitations and altitudes en-route permitting a diversion via a legal and safe route would be a great improvement in workload and safety. 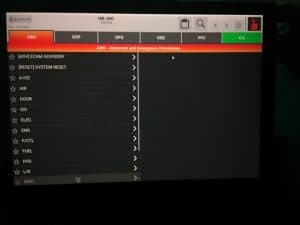 The eQRH is an improved electronic approach to the paper version. It is easier to follow up, as the color of the displayed lines changes when you progress in the checklist. It is more readable in the darkness and it has hyperlinks to other checklists, allowing a faster move to the corresponding chapters when we have to make a choice during the execution of a QRH procedure.

Unfortunately, the eQRH is still mostly organized like a book with chapters and sub-chapters. As pilots are usually selected among people with good 3D orientation skills, the access in the eQRH is, in its current format, definitely slower than in the paper form because, after some hours using the paper QRH, we knew intuitively where to look at.

When I need to use the eQRH, I have to switch away from the program displayed on the screen (mostly the eRM) to the eQRH. An index will then be displayed in order to reach the correct checklist and I must know the exact chapter and denomination in order to find what I am looking for. It is not always obvious when some items might be related to several chapters.

Using the paper QRH was also more comfortable in case of control change during the execution of a procedure, passing the book to my colleague. This is unthinkable with the computer, as I would miss all the other necessary data to fly.

Some improvements seem quite easy, similar to the library, with the implementation of artificial intelligence and using fuzzy logic software to improve the search. Allowing the creation of quick-access links that could be defined by the pilots themselves (according to their working behavior and priorities) and also giving the possibility to transfer the checklist state during the execution of the QRH, from one computer to the other one (such a synchronization process could be a background task using aircraft connectivity), in order to improve and speed up the process if a change in control is necessary.

Another point that must be definitely reconsidered is the EFB “thermal runaway”.

The applicable checklist requires that the non-affected pilot takes over the control, protecting himself with the oxygen mask. The pilot affected by the thermal runaway protects himself with the mobile protective breathing equipment (PBE), to carry the failing EFB away from the cockpit.

As communication with the oxygen mask and the PBE is almost impossible, how to conduct a checklist procedure if it has to be performed on the failed computer?

Despite these “youth illnesses”, we must admit that EFB offers pilots and airlines huge improvements and opportunities, knowing that some rethinking from the traditional approach is required.

In the last years, I have seen three very attractive products which represent massive enhancement and could be easily implemented into the EFB, allowing pilots access to highly valuable information, which are unavailable in the traditional paper form. Huge potential for safety, economy, debriefing, performance understanding, and personal improvement.

These tools are a reality and are already used by several airlines. 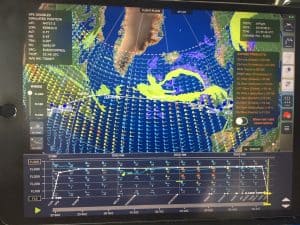 This application presents the last observations and forecasts in an innovative horizontal and vertical perspective, providing a clear 4D view of the weather. eWAS data can be used on the ground for better flight preparation and also during the flight to receive continuous updates. Thanks to a specific integration onboard the aircraft, data can be received by satellite and even by ACARS communication. ATC flight plan can be directly requested to the eWAS ground servers or copy-paste from the flight folder.

A great tool for a better awareness compared to the traditional MET CHARTS. 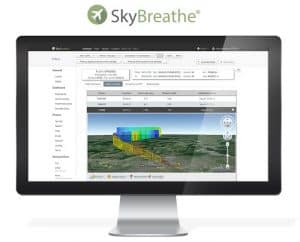 SkyBreathe is an innovative fuel-saving solution that uses planned data and, after the flight, compares the planned data and analyzes it with the “real data” generated by the specific flight.

This assessment is made according to the actual flight conditions (Payload, weather conditions, flight path, ATC constraints, etc.).

Based on this information, airlines can implement the most appropriate best practices to reduce their fuel burn and save money since jet fuel represents ~30% of their costs.

A great tool in order to understand where there is potential at the pilot’s level and how to improve directly own operation in order to be more fuel-efficient. 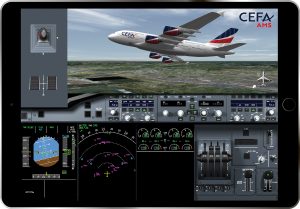 CEFA AMS allows pilots to replay their flights right after landing for understanding and debriefing purposes.

CEFA AMS leverages extensive experience in flight visualization using real-world flight recorder data, to enable pilots and flight crews to view an animation of their own flights… within minutes after landing.

Pilots can receive feedback right after landing on key segments of their flight, such as landing, take-off, go-around, and selected flight segment while the events of the flight are fresh in mind.

Each flight becomes a training opportunity

For the first time in the aviation industry, highly detailed flight data animation is available:

Now, do you have other proposals of improvement regarding the current EFB apps? What about other ideas and services that you like to use with your EFB, and that you did not have before? Would you prefer to go back to classical manuals?

Share your comments and thoughts with us! APATS 2019 is a great place for discussion, as well as this blog and social media. Let’s move things forward and make the best out of digitalization in aviation!

Furthermore, you can contact Pierre on LinkedIn or here.

Evidence Based Training: How to improve this concept in regular line operations

Flight data for pilots: a great plus to enhance flight safety